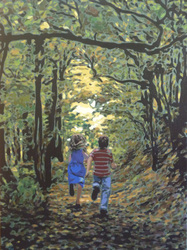 Originally from London, I studied painting in Coventry University and
graduated in 99. Shortly afterwards I moved to Spain and have been
living abroad ever since. I believe that this has had had a
considerable impact on my work and general art-related interests. I
began to work seriously as an artist in around 2004/5, participating
in group shows in Barcelona and Catalunya. I've had solo exhibitions
in Ireland and Spain and residencies in Spain and Australia. I'm
participating in the New Artist Fair as I'm moving back to London this autumn and feel rather disconnected from my 'home' town.

Both the natural and urban environment provide the settings for my
compositions. I'm particularly interested in the often 'jarring' role
of human beings in these environments and attempt to introduce a
considered level of theatricality to the pieces. Drawing and
photography provide the bulk of the material for the construction of
my figurative paintings.