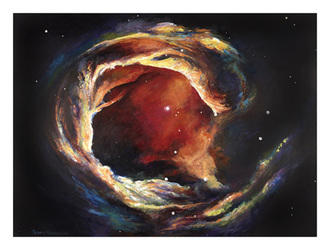 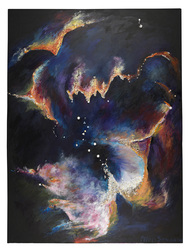 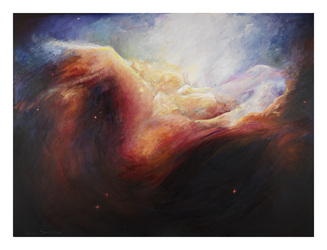 Born in Zambia of British parents and as a mature student studied fine art and design at the Johannesburg Art Foundation, South Africa, where vibrant African colour and imagery has influenced my expressive painting and drawing. Worked as an independent Graphic Designer in England for several years until our move to Wales where I became involved in the family farm and business.

Since 2011, I have been able to devote more time to my passion for painting and drawing. The starting point for most of my work is an image which has captured my
attention. The remembered details and impressions generating an emotional
response which are expressed in the subsequent paintings, often quite
different in character to the original image.

Recent interest in cosmology has inspired my cosmic series where I interpret
these vast, galactic structures as having a personality reminiscent of our own
human psyche.

I work mostly in acrylic with both brush and pallet knife. In my cosmic series
I sometimes include beads, shell, grit, sequins and other found objects which
I feel add depth and interest. I naturally prefer to paint on a large scale
although many of my water colours and pastel drawings are less than
30 x 20cm.

I have recently completed several commissions in both landscape and cosmic
themes. Some of my original paintings have found themselves in private
collections in South Africa, Australia and the UK.