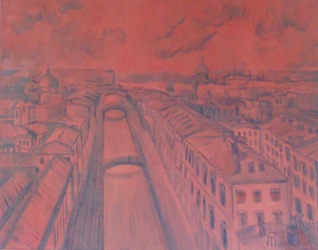 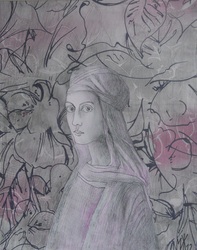 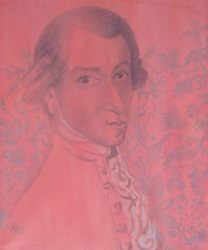 As soon as she could hold a pencil Marina was sketching images from
her mind and scenes of her childhood with unusual skill. She entered
Ioganson Fine Arts School at the Academy of Fine Arts  aged 11 years.7
years of traditional and classical training have formed the foundation
on which she later developed her unique imaginative style.

Portraiture images acting as complex metaphors for emotive experiences
of the human mind.

Since graduating from St.Petersburg ‘s  Herzen University with BA Hons
in Humanities Marina Jijina  has been interested in metaphysics and
studied Philosophy of Art under a mastership of a professor from
St.Petersburg State University.

Painting and drawing as a method of exploration of the artist’s own
subconscious mind in attempt to understand other people  better and
find her identity within society.The aesthetic attraction of the face
is not essential, while expression of emotion through face is of value
and becomes an allegory of beauty. While exploring different aspects
of the human condition Marina Jijina seeks to reinterpret past
traditions by applying them in a fresh contemporary context.

Marina Jijina exhibited in Russia,Great Britain,Spain and
Italy,including solo exhibitions in St.Petersburg, Russia,Cheshire and
London,Great Britain. In 2011 she joined Debut Contemporary Gallery in
Notting Hill, London,being selected out of over 2000 applicants to
become part of Emerging British artist project.

Marina Jijina’s work can be found in private collections in many
countries of the world: Russia, Great Britain, France, Italy,
Switzerland, Sweden, Iceland, Mexico, Spain, United States, Canada and
others.