Francis Charlton: Poet, Author and Artist and his New Book 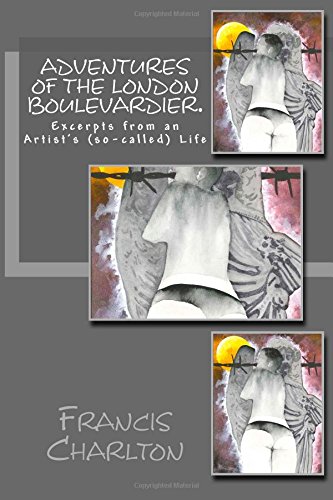 The London Boulevardier encounters Art in his local supermarket.

As the evening wore off I took my leave of the Garrick Club, although the Club would describe it as less of an amicable parting, more as me being ejected on the grounds of insobriety. That and the fact I wasn't a member. But, in my defence, I was signed in. By DF since you're probably wondering. And yes! I forged his signature.
Anyway, finding myself on the pavement outside the Club with a large aspidistra in a pot, I momentarily forgot what I was doing as the aspidistra was whispering to me. Mostly sarcastic comments in the vein of, 'Shouldn't you be in your studio painting?' And, 'The canvas won't paint itself!'
'Shut it!' I command the aspidistra, shaking the pot. At the same moment two Old Bill approach me and ask...
'Why, Sir, are you shouting at a vomit covered, er, aspidistra, I believe. Although we'll wait for Forensics to confirm the genus of this plant.'
Suddenly, it all it all comes flooding back to me. The quaffing of vintage port. The superior tone of the Club Secretary requesting me to refrain from drinking from the bottle. The aspidistra taunting me from its pedestal in the corner of the Members Room. And the man-handling as the Members Committee escort me out, after I mistakenly use the aspidistra as a receptacle to throw-up in.
'I need a drink officers!' I say, handing the aspidistra to one of the Old Bill. 'Bag it and tag it boys,' it's evidence of the lack of inclusivity of the, what can only be described, and yes I'll describe it for you, the archaic so-called Gentlemen's Clubs...'Ciao my son.' I say as I exit left to the Bedford Street Tesco Metro.
'The alcohol department?' I ask the rent a federale at the entrance. 'The alcohol department, toute suite?' The geezer points to somewhere behind him and I go in the opposite direction.
'I'm ready for an extremely large drink with a chaser of the same dimensions. That should set me up for some serious imbibing.' I think to myself.
'That man's talking to himself Brian. I think he's one of those street urchins you read about that live in Shoreditch.'
'Quiet Doris that poor man might here you!.'
'My Dog!' I think, I was talking out loud. 'Well nothing unusual in that.' I say...
'See Doris!'
As I'm walking down an aisle of canned goods, I notice out of the corner of my eye a display of Andy Warhol's Campbell's soup cans. As if from a acid flashback my memory returns. The suppressed images of a weekend in downtown Pittsburgh, a cheap motel with a coin operated vibrating bed and Lola (she was a showgirl) or was it Brad (he wanted to be a showgirl) suffice to say I never made it to the Andy Warhol Museum. But enough of this reminiscing. I focus on the shelves and the limited edition tomato soup cans. These iconic labels date back over fifty years to Warhol's series '32 Campbell's Soup Can.' A series which might be described as a homage to Warhol's lunch of a bowl of soup every day for over twenty years.
There are four designs available, produced in collaboration with the Andy Warhol Foundation. Picking up a basket I place one of each design carefully in it. Four cans costing less than £4, which is considerably less than that paid for his 'Big Campbell's Soup Can with Can Opener' which sold at auction for $28.8 million.
And with that in mind I head for the beer, wine and spirits department...