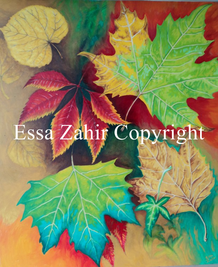 1) What made you decide to be an artist?

I don’t believe any true artist has a choice in the matter – you’re born with it. How you deal with that compulsion to create and what route you take depends on the individual. As a child, my paintings and drawings impressed my inner circle before I even went to school and since, I had everyone wait and wonder when the day would come. I only went to art school (foundation course only) because  I was pressured by my father – I wasn’t good at anything else. I never wanted to pursue art as a career. Art was too personal somehow, having to think how to go about it to make money. I was also very young at the time (18) and wanted to run around and later, pursue a career as an actor.

2) What genre best describes the kind of art which you create?

Others have always described my work as “illustrative” whichever route I’ve taken: imagination, still life or abstract. Personally, I try not to think about the genre and just paint the vision. Likewise, when I look at others works of art, I don’t analyse the genre, but simply appreciate the artist’s creation and if it speaks to me.

3) How has your artwork evolved since you began?

I went from painting pretty flowers as a child to dark and disturbing images in my teens and early twenties ( worrying my parents) then to complex themes in the 1990’s that screwed with people’s heads (Cosmological Warrior below) and now at 46, I’m back to painting pretty things again. I now couldn’t recreate what I did back then, no more than I could do what I’m doing now, back then. And it’s taken me that long, a lifetime to find that ‘uncomplicated’ joy I used to have as a child in painting the beauty I saw around me in the natural world, rather than the inner pain of the common human world. I now want people to feel joy looking at my art and spare them the thinking about life, death or the plight of the human soul.

4) With this art fair being your very first and formal exhibition, does that mean you never attempted to get into the art world?

My last painting and writing frenzy (1995 – 2000) was for the “Cosmological Warrior: Quest For The Ultimate Truth” a self-published ebook, devoted to theological and spiritual conceptions and meditations through art, poetry and inter-related short stories and teachings. It would be best described as ‘works by a renegade mad monk’ done 3000 years ago with a touch of Quentin Tarantino, all a reflection of what I was going through at the time, or rather an eruption of what had been building up inside me since childhood.

Throughout its production and as much as I tried to keep in mind the aim to market it as a ’commercial entity’ factors beyond my control meant its doom and the endeavour eventually collapsed and I lost out financially. The book was published though on the net (cosmowarrior.com Ltd 2000 - 2001) in three separate downloads, due to its heavy file sizes and under the pseudo name of “Susan Smith”. The reason behind that was purely for marketing, seeing more women sold books and art in the “new age” themes than men. I figured, too many wouldn’t even give it a glance if they knew it was written by a man with the Muslim name- Zahir and that the subject would regrettably fall under “religion”, although not specifically under any one school.

Interestingly, I sold more prints of the book’s illustrations than get downloads of the books. I had the shop’s owner keep telling me, everyone was asking “Who is this Susan Smith? What else has she done?” A favourite was a piece called “Warrior Summons”.

5) Which artist either historically or current, have influenced you the most?

William Turner. At school, studying for O and A level art and generally, in his works, I felt ‘the essence’ of his subjects more than any other artist. He painted the ‘energy’ beyond the confines of the entity. For example, sometimes you can’t tell where the sea ends and where the sky begins, but as entities, they’re very clear. In my head- heart and soul, that’s how I felt the source of the Cosmological Warrior: one indescribable force that expresses itself as “entities”: light, dark, feminine, masculine, earth, wind and fire. The human ‘vessel’ is lost in that eternal and timeless void. It summons the force and receives it. The trouble is, no human really knows what they’re doing and what to make of the “concepts” and therefore, our entire experience and conception of human life will always be bound by the “realm”. That’s where the part of the ‘artist’ as painter, poet and storyteller comes in: to challenge perception!

6) Has social media changed your art career in any way?

We’ll find out. All progress comes with good and bad. The good is that information can now be zoomed around the world in a way unimaginable 30 years ago. The bad thing is all you hold dear to your heart is a drop in the ocean amongst everything else. It can be useful, more so with people you’ve actually met and live in the same country, rather than a thousand strangers you may have collected as ‘friends’ from other parts of the world.

7) Where did you sell your first artwork and how did it feel?

I was 15 years old, my art teacher and long personal friend was standing right next to me at school in the head mistress’ office. I was offered £45 for a painting, which later hung in the school hall, but my mentor argued – and I got £25. She said she didn’t want me “initiated into the path, thinking, expecting and motivated by cash for letting go of a piece of work”. I never forgave her for that! (haha)

8) What are you planning to exhibit at the New Artist Fair in March 2015?

Who knows? My work is now inspired by nature and the natural environment, so I’m carrying on with that. I will however include at least prints from my Cosmological Warrior illustrations (original unsold stock 2000 press). The “Susan Smith” credit on the posters will give people a giggle, knowing the dark hairy man behind them! They may even prove a good investment to any buyer, given the very limited stock!